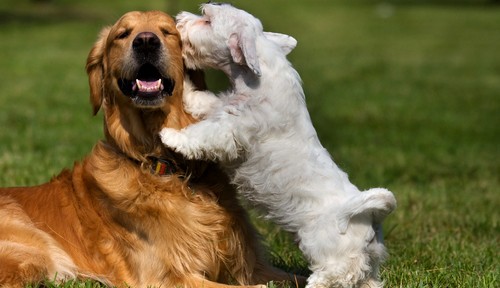 When people decide to take on a new kitten or puppy, it is often their first pet. They are frequently surprised by the energy and activity of the young animal, and sometimes people find that entertaining their pet can be a full time job. This can apply especially to kittens: if clients mention this exhausting aspect of owning a kitten, my first question to them is ‘Have you considered getting another?’ The initial response is sometimes astonishment -‘We already have one kitten which is proving to be a handful – how could we possibly cope with two?’

The reason for my suggestion is that the best, most entertaining toy a kitten can have is another kitten. Two kittens in the same house become close friends – they play together all day, then collapse exhausted together at night. They become a much more self-sufficient unit, and whilst their owners still play with the kittens, they are no longer the sole centre of attention, as they were for the lone kitten. It’s different for dogs, who may be more likely to relate closely to the humans in the house, but I know many people who believe that “two dogs are easier than one” when it comes to keeping one another company for the periods that humans are away.

Most of our pets are very social creatures, and they enjoy the company of other animals as much as we humans enjoy having friends. Obviously there are exceptions. If old Rover has ruled the household for a decade, he will not take kindly at first to a young challenger. And indeed some animals simply don’t seem to like each other. I heard recently of two Jack Russell litter mates who ended up in the same house. For some reason they hated one another. They used to get involved in serious fights together, which frequently resulted in visits to the vet for stitch ups. The owners tried all sorts of behavioural techniques to encourage them to become tolerant of each other, but in the end they had to re-home one of the dogs. Both dogs were fine with other animals, but obviously there was a family feud dating back to early puppyhood!

Such incompatibilities are rare. Most animals, after an uneasy settling in period, learn to enjoy the company of others. My own two cats use each other as pillows – they sleep in the same basket, the curled up C-shape of one cat fitting snugly into the C-shape of the other. Before we had the second cat, our solo cat used to go missing for days – since his friend has arrived, he is much happier to stay at home. The original cat is definitely the boss – he always eats first at feeding time, and if there is a disagreement, he always wins the fight. But in general, their relationship is very positive.

For older pets which are beginning to slow down, the introduction of a new young life in the household can provide a useful stimulus to activity. Older dogs by themselves tend to get ‘stuck in their ways’ – they spend more and more time curled up by the fireside. This can be a downwards spiral – the dog becomes less active, so starts to put on weight, and so becomes even less keen to do anything. Such an animal will not take kindly to a puppy at first – there will be growls and snaps when the puppy refuses to respect the older animal. In most cases, the older dog soon seems to realise that the younger animal is just an innocent young idiot, and the pup learns just how far the old codger can be pushed. In time, they often learn to enjoy each other’s company, and this has very positive effects on the old dog’s quality of life. He exercises more, he loses weight and most importantly, a sparkle returns to his eye. After all, he must never let the cheeky young fellow get the better of him!