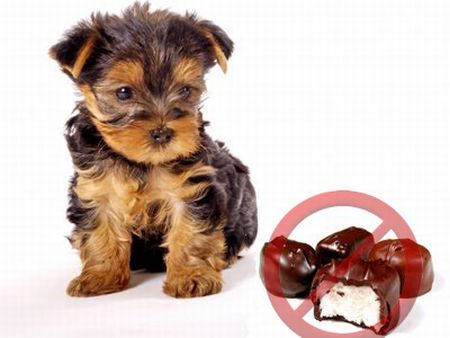 When it comes to food dogs rarely have self control so we have to have it for them and monitor what is available. Here are 5 Things Your Dog Should Never Eat.

This is the most well known canine taboo as well as being the most common threat. If your dog manages to get there paws on chocolate it can end in vomiting, diarrhoea and even seizures. Some experts even say the darker the chocolate, the more severe the poisoning.

Not an edible item you would flag as dangerous but dogs that ingest grapes can suffer from vomiting, diarrhoea and other gastrointestinal discomfort, not to mention increased risk of kidney failure. If you’re the owner of a smaller dog, your dog could easily choke on grapes (and raisins). Remember there little stomachs work totally different to ours and can’t process some of the basic items in our diet.

3. Caffeine
Dogs are very delicate when it comes to caffeine as it can overstimulate the central nervous system and end up in severe restlessness, heart palpitations and even fatal consequences. While a couple of laps could potentially be harmless, any more can have very negative after affects (especially for small dogs).

Often used as a sugar substitute in products marketed as ‘sugar-free’ (such as chewing gum, mints and even some toothpaste), xylitol is considered better for our teeth than other kinds of sugar – but for dogs it can be incredibly dangerous and even fatal. Xylitol toxicity in dogs is increasingly becoming a problem; don’t let your pooch near this stuff. This is a big one to look out for.

Seems obvious – but it’s important to be aware and not to let your dog near this stuff. A common cause of dog poisoning, rodent poisons designed to attract animals can end in uncontrollable bleeding that can be fatal for dogs. If you have a rodent problem find a different method or you could have a dog problem soon as well.